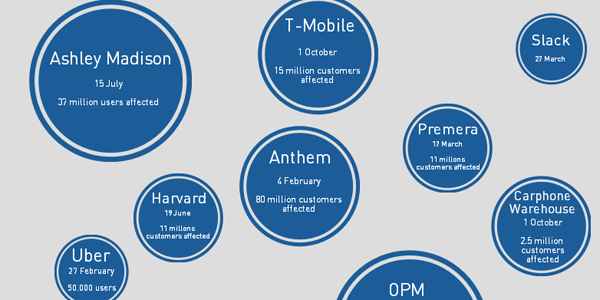 Why are data and information breaches at large companies and SMEs still being reported daily in 2015?

Two thirds of these cases of theft are due to human errors or ineffective security systems. It is enough for an employee to filter an email received incorrectly and install a trojan horse on the computer without realizing or the system detecting it; or for the same employee to be angry with the company and seek revenge by stealing information. The company will then face hopeless information leaks, leading to serious economic losses and a drop in client confidence.

As this year draws to a close, many companies have experienced security problems involving their most confidential data. 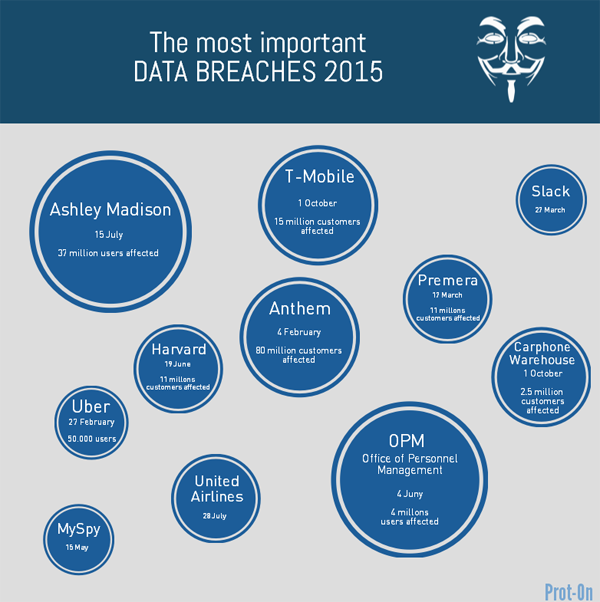 Surely you’ve heard about Ashley Madison, an online dating service for married people that was hacked on July 15 by a group known as “The Impact Team”. They extracted 37 million users’ information (names, emails, telephone numbers, bank details, etc.) and disclosed many infidelities… The founder was forced to resign.

Another well-known case of theft occurred in February this year. 80 million people’s information saw the light when malicious software was hosted in one of the American health insurance Anthem’s systems. The stolen information included names, dates of birth, social security numbers, etc.

Premera, another slightly smaller health insurance company in the US, was also attacked this year, exposing 11 million clients’ information. It is still being investigated whether this data has been used inappropriately in an insurance fraud.

Companies from the health sector have no doubt been the most affected. At the end of 2014, Ucla Health System was also hacked, affecting 4.5 million patients.

In February 2015, Uber, a service connecting passengers with drivers in cities across the world, reported that software pirates had illegally accessed a database with the names and license plates of 50,000 drivers.

Throughout the year, a group of hackers has also taken the data of 15 million T-Mobile customers, including addresses, social security numbers, driver’s licenses and passports.

Also under threat are airline companies. At the end of 2014, Japan Airlines and British Airways were affected. This year United Airlines has also reported a series of violations of its database systems, admitting that hackers could have taken their client’s information.

The prestigious university Harvard has also possibly been affected by a cyber-attack, although it is unknown which data may have been compromised. In a statement, the university asked all users to change their passwords.

An internal investigation is still underway at the company Carphone Warehouse. A few months ago it reported that after being hacked, it was possible that 2.5 million people’s data had been stolen.

Software has also been attacked, demonstrating that it is also under the watch of computer pirates:

MySpy, software used to spy on the mobile devices of children and associates, has also been hacked recently, although the company denies it. It appears that a report on emails, private text messages or payment details was taken from the company and published on a hidden website on Tor.

Slack, a communication service admitted that a data breach had occurred, exposing its users’ emails and Skype IDs.

The telecom firm’s Talk Talk revealed this Thursday it had fallen victim to a cyber attack and the details of up to 4m customers had been stolen. Reports suggest some TalkTalk customers have since seen suspicious activity on their bank accounts.

Finally, there is what seems like an internal war waging between China and the US; the cyber-attacks on the OPM (the US Office of Personnel Management), presumably from China, have led to the theft of at least 4 million federal employees’ data. The Office of Personnel Management is the federal government’s department of human resources. It performs record checks prior to issuing security authorizations. According to its website, the agency manages 90% of federal record investigations. American civil servants maintained that the cybertheft began in China. It is suspected to be an act of espionage by the government in Beijing, which has refused to comment. We can only assume that this is far from over and reading about cybercrimes against the American federal government has only just begun. 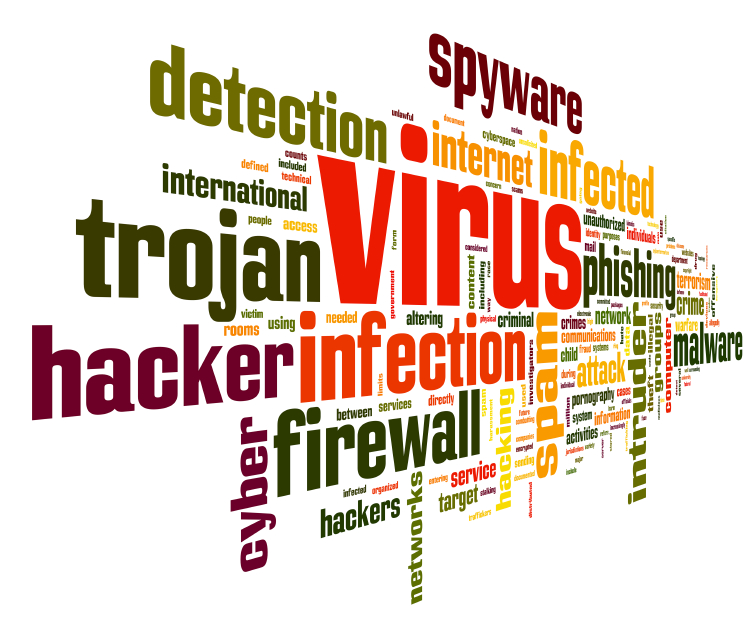