Prot-On participated in “The South Summit 2014”

On 8th to 10th Octuber last, Prot-On participated in the biggest event for Start-ups in Spain “The South Summit 2014”

Prot-On was finalist with other 29 startups from a wide range of industries from early to growth stage. The selected startups will have access to unique networking opportunities, visibility and the possibility to present their pitches in front of a unique audience. With 4.000 investors, more tan 2.000 entrepreneurs and 300 investors, Spain Startup Summit has become, in less than two years, the leading startup conference in the South of Europe.

Prot-On was also selected as 5 best startups by ZDNET.

After the ceremony, will take place one of the most anticipated interventions, that of Ferrán Adriá, who taught the paper Innovation in the Art of Food and you will receive, by the turning point that resulted in his work for world kitchen, disruptive innovation award. Finally Eric Schmidt, global President of Google, will proceed to the closing session of this meeting.

Schmidt announced the founding of Google Campus Madrid to be used to nurture Startups in Europe. His speech included him saying: “the next explosion will be in medecine, in biology and in big data”. 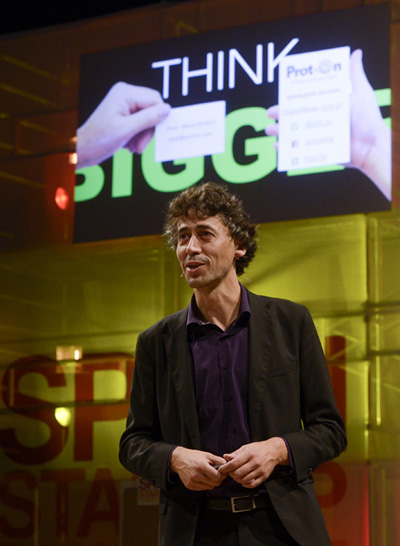