The internet industry, waiting on the “European Cloud Computing Strategy”

Cloud computing offers an opportunity to the European economies to emerge from the crisis they are facing. It represents a revolutionary change in terms of increased productivity, job creation, business and competitive development, which will also bring with it new business.

However, issues such as the protection of data, interoperability between services and legal responsibility from the Cloud service providers generate reluctance among companies and users to adopt this new way of working.

On January 16, 2012, four corporate presidents (Oracle, Google, SAP and EuroCloud) from a Cloud Computing industry work group met with representatives of the European Commission, David Callahan and Zimmerman Rainer, to discuss next steps following the presentation of the conclusions of a group of experts on Cloud Computing to Commissioner Nelly Kroes.

One of the main topics of discussion was the revision of the new Data Protection Directive from the perspective of the Cloud. The General Manager of the Information Society wants to ensure that proposals for revision of the legal framework of this Directive, which will be discussed in the European Parliament this year, will not hinder the development of Cloud services in Europe.

A few days later, in her speech to the World Economic Forum held in Davos, Nelly Kroes, after enumerating the benefits associated with Cloud Computing, explained the barriers which still exist and which must be overcome: how can I know what type of service I am buying?, will my data be protected?, in which vendors can I trust?, if I don’t like the service that I receive, can I easily change providers?, or can I demand the fulfillment of the contract through legal action?. These questions are particularly problematic for small businesses, which are those that would most benefit from Cloud based services. 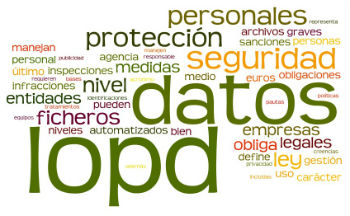 At this time, the European Commissioner for a Digital Agenda also announced the creation of the European Association for the Cloud, providing it with an initial investment of 10 million euros. Its initial job would be to define common requirements for the acquisition of Cloud based services (standards, security, free competition…). In the second phase, the Association would offer conceptual solutions for these common requirements and, finally, the Association would work on the implementation of all of the above.

In general, Cloud computing can provide a significant boost to the economy. With it, the Government of the United Kingdom expects to save 20% on technology expenses, mostly due to software savings. As well as being useful savings during tense times in public finances, in Germany they estimate that Cloud Computing could generate more than 200,000 EUR million in economic benefits and more than 800,000 jobs in five years.

It is likely that the concern of Technology and Cloud service providers could be motivated by the publication, in September 2011, of the “Orientation Guide: Cloud computing”, by the German data protection authority. Recommendations and obligations of this new regulation will force a revision of all existing Cloud services contracts. In addition, the guide stresses the need for total control by the customer in the treatment of their data and restricts the transfer, to countries outside of Europe, of data related to health, trade union affiliation or religious beliefs.

Meanwhile, the Committee is currently discussing the draft of the EU Council’s “Data Protection Law” (11326/2012, June 22). Strongly inspired by the Spanish Data Protection Law (RD 1720/2007, December 21), the draft European regulation has recently been substantially amended. The early versions were rejected for various reasons, mostly to accommodate the not always reconcilable objectives of the industry on the one hand, and consumer associations on the other.

The industry, for its part, seeks greater flexibility in the interpretation of the Directive, in order to prevent obstacles to the “colonization” of the European market by foreign Cloud providers. Others hope to preserve the privacy and the rights of European citizens, as was expressed by Commissioner Kroes in her speech at the Davos Forum, not by coincidence entitled “Cloud Computing: Growth Opportunities vs. Privacy”.

Apparently, a new fight is expected between utilitarian visionaries and the guarantors of the laws, in which pressures of the giants of the industry are up against the defense of fundamental principles and rights of the citizens, which we have been delegated to our political representatives. When technological advances and laws do not fit, the easy way to solve it is to pressure for the reinterpretation and rewriting of the laws to accommodate the reality of “this is what there is”. The hard way, on the other hand, involves efforts in innovation on the side of the industry, which needs to put technology at the service of the defense of citizens’ rights.

In this context, services such as those from Protection on-line must be taken into account in order to make Cloud based services, with their undisputed advantages, compatible with the legal requirements that preserve our privacy and our rights as consumers of these services. The Cloud and data protection regulation can be friends, without us having to change our principals because of it, as Groucho Marx would have said.